Steven's still writing and recording but everything's on a TEMP hold. Expecting a full instrumental album and a full vocal relase too. Could be a double album! Stay in. Stay healthy. Patience. Soon.

Got an update from the studio: Steven's been hard at work on album number 3! It's going to be a mix of vocal and instrumental tracks, still in the hard rock/heavy metal category. The instrumentals pick up where Auditory Hallucinations left off and there may be a few surprises here and there. The vocal tracks will be the biggest shock as you'll either really like or really not like Steven's voice.
As Steven told us recently: "putting out the instrumental CDs wasn't the main goal. Yes I did plan on releasing instrumental music just not as my main musical outlet. Don't get me wrong they are very fulfilling to create and release into the the wild but I was a songwriter before I was an instrumentalist. I had a few albums worth of material, you know, real songs with hooks and vocals, but for one reason or another they didn't get released. The instrumental albums just took their place."
As far as being a “singer”: "I never really considered myself that, I won't be holding a high E at the end of the stage for an hour, ya know? I consider myself to be more of a conducting storyteller if there is such a thing. With the way that I write the lyrics they could easily be a short story by themselves. Then they get condensed into the confines of a couple verses. In order to bring them to life I'm less interested in “singing” the correct pitch as I am with the phrasing and tone (or emotion) of different words and where they fall in a phrase. So maybe speech actor is the correct title.”
From what we've heard so far there are ten tracks and most are very up-tempo. And loud, both dynamically and just for lack of a better word LOUD. Of those 10 most seemed to average around 3 minutes or so and follow the basic rock song structure that everyone's familiar with. And no, there doesn't appear to be any ballads – so put your lighters away folks.

October 2017:
Luminous video complete, check it out below:

We just want to thank all of you for watching the video clips from the “Auditory Hallucinations” album and are pleased that you've enjoyed them. We are aware of the glitches on YT about comments going missing and were told “they” are working on it. Now some of you are wondering where the video clips are for the instrumentals "Luminous" and "Squeezy Wheezie": rest assured they are in the works. Turns out there were a few wrinkles (actually quite a few but who's really counting) in the storyboards which sent both of those projects off the rails - but hey - it's all rock n' roll right?
Even though there was mostly positive reaction to the art track/question and answer style videos which were released for the “Auditory Hallucinations” album those two clips are not going to be question and answer style clips.
So why is that?
It turns out that "Luminous" is part of a song trilogy – we know no surprise there right – and the track "Squeezy Wheezie" is going to be a full video. Steven's told us that the two other songs from that trilogy will be on his next album and that all three *could* be made into a a short 15 minute clip. Or all three could be the background for an entirely new clip with an alternate story line. Ah yes...thinkin' big...Patience grasshopper.

Steven's been toying with the idea of making full song lesson videos. They would feature him going over each part of the song, playing and explaining the material to give the student an entirely new level of insight into how and why the music sounds the way it does. There may even be a gear rundown but that hasn't been confirmed yet. The current plan would be a video for each instrument from the track. So that's one for guitar, bass and drums. The videos would be stand alone but will refer to the sheet music – Steve will be using the available sheet music/guitar tab for the lessons to avoid confusion and keep everyone on the same page. For those that can't read music don't worry as you'll still be able to follow along with the video.
Steven stressed one point very strongly however, that potential students shouldn't get too hung up on the precision of every wiggle or quarter step bend. Within reason of course, but every player is different and every player is going to interpret what they hear (and how they express that) slightly differently. Not talking about out right wrong notes being played – just the subtle quirks.
Sounds like quite a massive project. At the very least it would give fans some extra insight into how the music is created. When he starts launching the content we'll let you know. 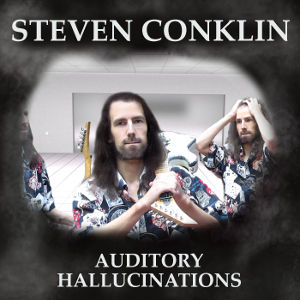 2016:
Auditory Hallucinations is out now!

Steven's latest offering which is raw and slightly more accessible, features 7 all new instrumental tracks. Of course this is still a Steven Conklin album and there's the expected elements of humor (Chisel Chins Entrance Music and Squeezy Wheezie) and odd time signatures (Naptime), to video games (Luminous) and just plain odd (Is This Broken? and Bad Capacitor).
As we've all come to expect over the years, Steven played all the instruments as well as handled all the production and mixing duties.
Available at all the major digital outlets.

Due to COVID-19, Steven is not currently on tour.

Steven can be reached at the following contact points:

Steven is a self funded and self produced independent musician and content creator who has been unleashing his brand of high octane music throughout the Universe for well over a decade. As a multi-instrumentalist, the only limitations are the medium unto which the music must be contained to.
While often referred to as the under-the-radar guy, Steven's been featured on the MTV app as well as a handful of other items throughout the years. Steven's latest focus has been on the visual element of his music. As an avid animation fan he's always trying to push his visual work further from what he's already done as well as what he's already seen.
Sometimes the results resonate well with the audience and other times, well, not so much.
While not content with so called standards and trends - the one size fits all model, Steven also builds most of his own instruments, all in an effort to bring his visions to life.